The alleged robbers were burnt to death at MCC Junction, beside Conoil Filling Station, along Enugu/Onitsha highway on Wednesday, January 19.

According to Nigerian Tribune, the suspects came on a motorcycle, allegedly robbed some residents in Awada of undisclosed amount of money, phones and other items and shot sporadically in the air to scare people before escaping.

However, they were given a hot chase and were nabbed after the MCC Junction.

It was gathered that the mob immediately placed the motorcycle on top of the suspected armed robbers and set them on fire. 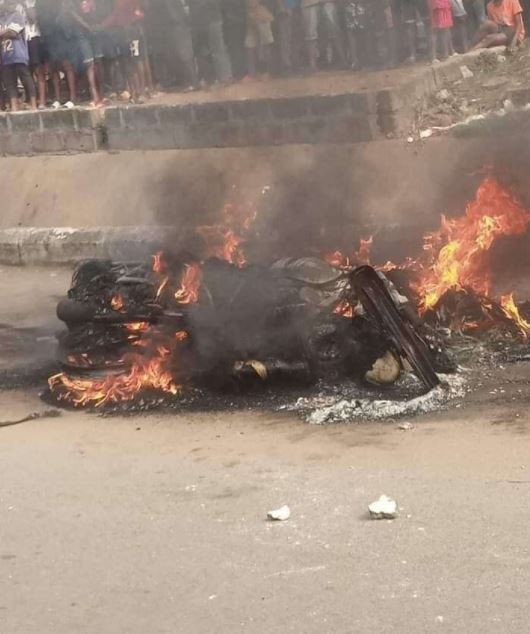 you might also like...
SO SAD!!! “I Thought He Was An Antelope” – Hunter Who Shot Imam Dead (Photo)
SO SAD!!! Kenyan Woman Who Left Her Husband Of 20yrs To Marry The “Holy Spirit” Found Dead
HOT!!! Lady Who Said She Slept With A Dog For Over N1.5m Begs For Forgiveness (video)
Lady Who Harassed Ruger Finally Breaks Silence, Says She Was Right On Her Actions (Watch Video)
Ayra Starr, Zinoleesky, BNXN, Ruger. Who Should Win Next Rated Headies Award?
SO SAD!!! Photo Of Suspected Thief Who Was Caught In The Act In Ogun
HOT!!! Pastor Who Said Osinbajo Would Win APC Presidential Primaries Reveals Why The Prophecy Failed