This is the Disclaimer he wrote;

The attention of H.E Comrade Adams Oshiomhole has been drawn to a series of tweets from a twitter account @A_Oshiomhole commenting on recent national issues. Specifically, there was a tweet that originated from this account on January 20, 2022 which seem to insinuate that H. E. Seyi Makinde, Executive Governor of Oyo State is an “Overhyped Social Media Governor.”

We wish to alert the general public that this twitter account is fake as it is not operated by Comrade Adams Oshiomhole or any of his aides.

Comrade Adams Oshiomhole holds H. E Governor Seyi Makinde in high esteem and has no reason whatsoever to privately or publicly denigrate him.

Let it be on record that all tweets that have originated from this account or will originate from it in the future do not represent the opinions or sentiments of Comrade Adams Oshiomhole.

Our investigations have further revealed that there are other fake twitter accounts illegally opened with Comrade Adams Oshiomhole’s name and photographs.

Some of them are:

Any tweets originating from the above fake accounts should be disregarded as they do not represent the opinions or sentiments of Comrade Adams Oshiomhole.

For the avoidance of doubt, Comrade Adams Oshiomhole’s official handle which will be verified soon is @aoshiomhole 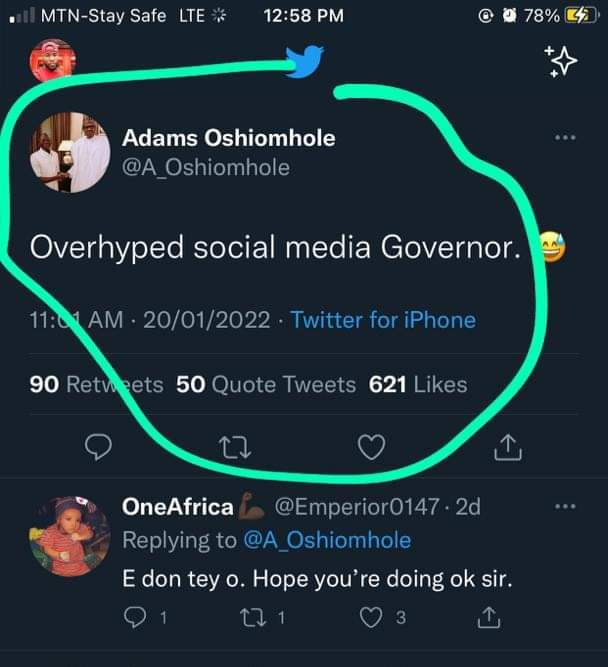